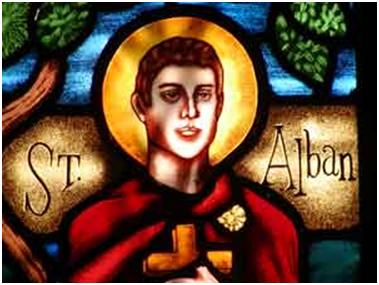 “I worship and adore the true and living God who created all things.”

St. Alban is noted as the first Christian martyr in Britain in 304. His story is an amazing one. St. Alban was a British soldier. He met a Christian priest and built a strong bond with him. He converted and was baptized by the priest in his home. While Christianity and Christians were being persecuted, the authorities arrived at St. Alban’s house looking for the priest. Alban, disguised himself as the priest and was taken away. The emperor, who was angry at the “bait and switch” made sure Alban was handled as the priest would have been. He was executed shortly after, thus becoming the first Christian martyr in Britain.

I first read about St. Alban in The Venerable Bede’s
Ecclesiastical History of an English People. His story is in inspiring for all Anglicans and military personnel. Since I am an Anglican Chaplain, I’m doubly blessed and inspired!

St. Alban is often looked at as someone who gave himself up to further the cause of Christianity by sacrificing his life for the life of an Anglican priest. At times, we may be called to make a sacrifice for the cause of Christ. The sacrifice maybe friends, family, popularity, a job, etc. God will inform you of what the sacrifice will be. Sometimes, we as Christians, are so excited to be a “soldier for Christ”, we purposefully place ourselves in danger and call it “God’s will.” That is not God ordained. You will know, without a shadow of a doubt, when God tells you do something. It’s much like the Damascus experience that St. Paul endures. You most certainly will be hesitant for a moment, and then, with extreme humility, accept the call God placed on your life, as did St. Alban.