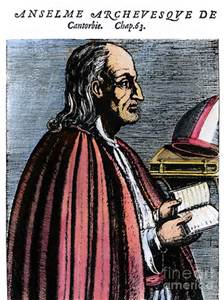 Almighty God, you raised up your servant Anselm to teach the Church of his day to understand its faith in your eternal Being, perfect justice, and saving mercy: Provide your Church in every age with devout and learned scholars and teachers, that we may be able to give a reason for the hope that is in us; through Jesus Christ our Lord, who lives and reigns with you and the Holy Spirit, one God, for ever and ever. Amen.

St. Anselm served as the Archbishop of Canterbury from 1093 – 1109 AD. He was a Benedictine monk, then abbot, and ultimately elevated to the rank of Archbishop. He was a reluctant to accept the appointment, as he was very introspective and did not have political aspirations. He was also involved (directly and/or indirectly) with the Investiture Controversy of the 11th and 12th centuries. His primary concern was serving the people of England, not advancing his clerical-political career.

It seems that I was destined to have a relationship, if only a passing one, with St. Anselm. I recall in high school, being pressed by one of the school administrators to attend “St. A’s” in New Hampshire “because its a good, small, Catholic school.” Despite me not being Roman Catholic, the Benedictines could not compete with the Jesuits, so I did not attend St. Anselm College.

Fast forward a couple of years, I am now an Anglican, reading about the lineage of the Archbishops of Canterbury. I stumble upon the name of St. Anselm. In the end, it kind of comes full circle for me.

St. Anselm represents what is needed in Christ’s Church;  clergy who are concerned with the souls of those who placed in their care. What I see now is a growing clergy body composed of careerists. His Holiness Pope Francis addressed this very thing early in his pontificate. This is something that affects all the church, not just non denominational, Pentecostal churches. The constant chase for purple shirts and titles is leaving those who need spiritual nourishment behind. Hopefully, we can address this before it’s too late.