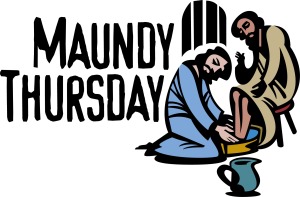 ALMIGHTY Father, whose dear Son, on the night before he suffered, did institute the Sacrament of his Body and Blood; Mercifully grant that we may thankfully receive the same in remembrance of him, who in these holy mysteries giveth us a pledge of life eternal; the same thy Son Jesus Christ our Lord, who now liveth and reigneth with thee and the Holy Spirit ever, one God, world without end. Amen.

The last Maundy Thursday post I wrote was in 2014. I retold the story of my first foot washing experience. Since that last post, I have not participated in a foot washing ceremony.

It has not been by choice, but rather circumstance. The members of my parish did not practice the foot washing ritual but rather the Communion one. The Communion ritual of Maundy Thursday is the communal meal. I’ve experienced the entire spectrum of the Eucharist taken in unison while gathered around the altar, to an elaborate community meal. My parish practiced the former. As a Baptist, we would practice the latter.

I always wondered why my Anglican parishioners were hesitant in participating in the foot washing ceremony. The few times I brought it up, I was told “that’s not what we do.” Due to the parish being more “Protestant/Evangelical-leaning” and I, of the Anglo-Catholic persuasion, never tried to force the issue. I suspect that the beloved members of my parish did not feel comfortable in the intimacy that is foot washing. Even when attending one of my favorite parishes (when I’m not on duty) for Maundy Thursday, only 1 person had their feet washed by the Rector as everyone observed from the comfort of their pews.

I was beginning to think that it was an American phenomenon. That the intimacy of foot washing was too much for American Christians, despite much of the content of our television shows and movies. That was until I recently read the Maundy Thursday post from my brother priest, Fr. Esau McCaulley. He expressed the importance of the foot washing ceremony and the love of Christ that is embedded in it.

He is correct and that is why I am drawn to it. The amount of love, and humility that is shared in that moment. The fact that one has to serve and be served in the same setting is an amazing experience. I value the ritual because without experiencing it back in Mexico in 2004, as the lone Baptist with Roman Catholics, I may not have listened to God calling me to Anglicanism years later.