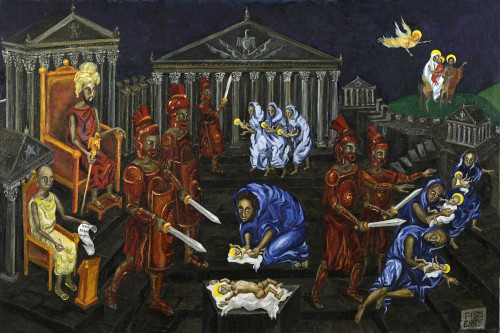 O ALMIGHTY God, who out of the mouths of babes and sucklings hast ordained strength, and madest infants to glorify thee by their deaths; Mortify and kill all vices in us, and so strengthen us by thy grace, that by the innocency of our lives, and constancy of our faith even unto death, we may glorify thy holy Name; through Jesus Christ our Lord. Amen.

– Collect for The Innocent’s Day; 1662 Book of Common Prayer

The Feast of the Holy Innocents is a difficult day to commemorate. I have found that when it comes to the Holy Innocents, many clergy glance over their demise and rush to the more comfortable moment of the Holy Name of Jesus (1 JAN). At times, when the scripture describing the slaughter of boys under the age of 2 years-old is read, the reader either consciously or unconsciously rushes to finish that section of the text. It is important that we do not forget the Holy Innocents.

The children who were slaughtered that day over 2000 years ago were martyrs of the faith. Without them, we do not know for certain what would have been. The death of children is never an easy topic for discussion. We see this now when it comes to the tragedy of Sandyhook Elementary in Connecticut. Rather than discussing the real issue of mental illness and the lack of support for those who are mentally ill, parts of the media and politicians are arguing for stronger or less regulated gun control. At the end of the day, whether it was a gun, or in the days of King Herrod, a knife like object, there was a element of evil that was present. Whether or not that evil is in the form of jealousy or depression, it is evil nevertheless.

The children who were massacred 200 years ago, like the children of Sandyhook Elementary, like the thousands of kids worldwide who are dying of starvation, HIV/AIDS and/or civil war, they were innocent. Let us keep this day, as a remembrance of the innocent lives that were lost. And let us hold on to the hope that they dwell in the Kingdom of God, because Jesus loves the little children.